Some people asked me what interesting I had found in Servas.

So, in this article, I will try to answer this question and explain why I love this organization so much.

Of course, I’m not a veteran with 30-year experience, but it has been 5 years since I joined Servas and I am fully convinced of the right choice.

Now I would like to tell you my story from the very beginning. Our young family has always loved to travel.

Actually, it doesn’t matter where and how.

The impressions remained after visiting new countries, cities have always been in our memories and photographs.

We have always been interested not only in the country which we visited as tourists, but also in the current situation in it.

You can’t judge a country by looking at what it looks like through a coach or hotel window.

It’s like watching a commercial. You’ll be shown the best of it, but the rest will stay behind the frame. Personally, I think that the most interesting for us as travelers is not only a country but also its people.

There is one more option here – you can try living in the country you are visiting for 1 or 2 years just to get to know it better but unfortunately, you’ll always be limited by time or resources.

That’s why the key factor of getting acquainted with a country is its people. With the help of them you’ll always be able to find out all the details just asking different questions.

Such meetings not only make us richer but they also help us a lot. That’s why I became a Servas traveler. 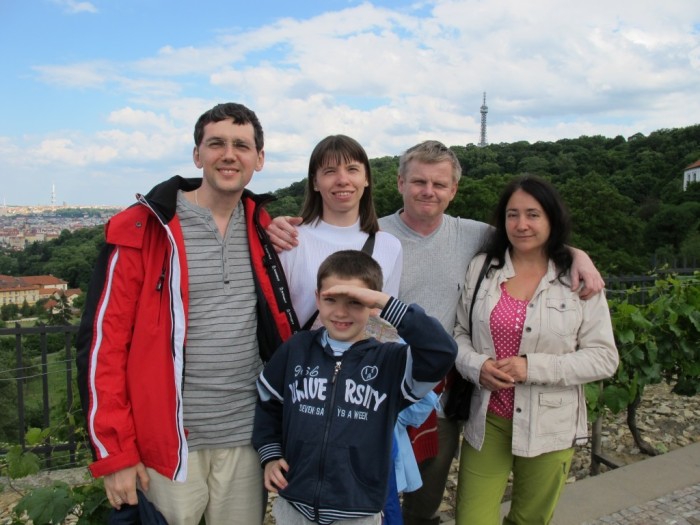 Tell me please what I could see and learn staying as a tourist in an ordinary hotel. A tour schedule, guidebooks… this is not the same.

That’s why I think Servas gives you, a common traveler, something you can hardly get from other journeys. Do you know what it is? That’s a real life chat with people.

The world itself comes to you

Unfortunately, we cannot constantly travel around the world. My wife and I work hard, our son studies at school. So, what can we do in this case? Should we wait 1 year for the next vacation? I think not.

Why don’t we make the world come to us? I decided to become a Servas host. I was thinking about meeting new people who could tell me about their countries and I wouldn’t have to go anywhere to learn about them.

Moreover, my son would be able to learn about other cultures and traditions, practice speaking foreign languages.

Soon my dream day came. We were contacted by Kobus from South Africa. At that time he was traveling by bike around the world (a marathon across Canada, America, Europe, Ukraine, Russia and Mongolia. 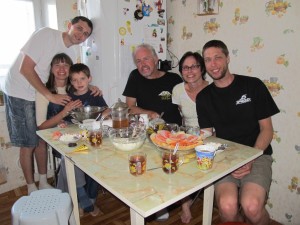 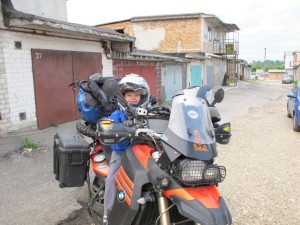 Can you imagine my son’s impressions after listening to such stories?

Strangers on motorbikes were telling us their stories about traveling. Our conversation was exciting and relaxing.

My son couldn’t refuse an offer of riding a motorbike.

It was the brightest moment of the meeting. Our chat with Kobus and his team gave us lots of fresh impressions.

I started thinking of going on a long journey.

One more interesting moment for me was the meeting with the Polish delegation in Lviv in 2012. By the way it coincided with my birthday. I made friends with new inspiring people from Poland.

Personally, I think that Servas members shouldn’t only take but give something.

I was very glad to get acquainted with Jordan from Canada.

At that time he was learning Ukrainian in Lviv and wanted to visit us in Ternopil.

Actually Ternopil is not far away from Lviv, it only takes two hours to get from one city to the other.

During his stay we spoke both English and Ukrainian. My son was so much happy to give some grammar lessons to Jondan.

Raising his qualifications he made new Lego robots with our guest, spent hours learning how to extract energy from chemical processes using water splitting.

Later we rode our bicycles in the park, played basketball together and talked a lot. 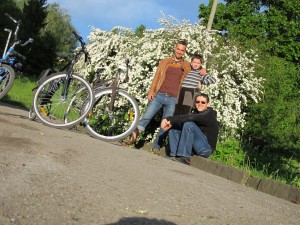 I realized that Servas really worked.

The world itself started coming to us.

The representatives of different countries who started visiting us gave us lots of necessary and interesting information from within the country.

Eventually, we became hosts for Servas travelers from Poland and Israel.

Their team was on a tour.

The route passed through our city.

I was lucky to get a chance to learn more about the two countries at the same time.

We showed our quiet and cozy city to the guests too. During our conversation, the time flew by quickly.

The answers received about Poland and Israel we couldn’t find on any website or in Wikipedia.

They were really interesting people, even our dog made friends with them though it happens very rarely. 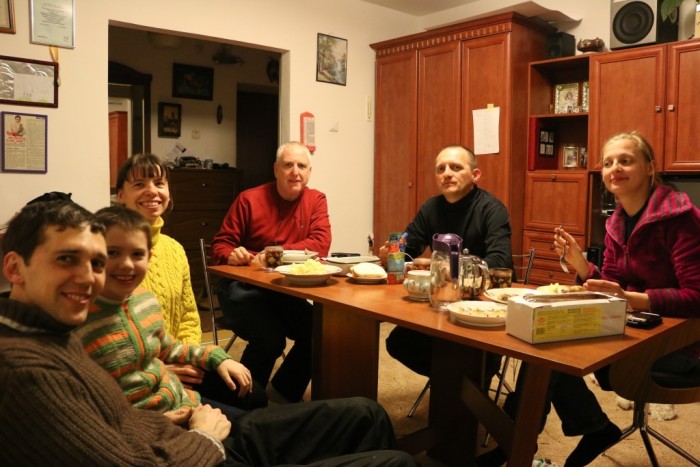 Looking back I regret not knowing about Servas when I was a student.

How many new friends I could have made.

I feel sorry for those people who haven’t become members of Servas.

Perhaps they don’t realize benefits of being a member of this organization.

That’s why I am doing my best to promote the ideas of Servas via our Ukrainian website and an educational video about Servas on Youtube.

Observing Servas President’s promotion of our organization I see myself moving in the right direction.

We cannot ignore the web factor as an important part that allows you to fully embrace all people around the Earth.

We have already planned our family trip to new countries this summer.

I have contacted Hosts, Day Hosts and I think we will make new friends soon.

What about your friends? Aren’t they in Servas yet?